Dr. Linda Shookster
During the day, I practice rheumatology, but my night job is exploring nineteenth century New York City. Optimally, I'd like to visit Old New York with my digital camera, and take the first-ever digital photos of our great city long gone! I'm a member of the Theodore Roosevelt Association, the New-York Historical Society, the Lincoln Group of New York, and a Friend of the Historic Districts Council. I'm also a sustaining member of the Friends of Lyndhurst, Helen Gould Shepard's spring residence on the Hudson in Tarrytown, NY.

Oscar Wilde Has Ties to NYC, Past and Present

Although Oscar Wilde  1854-1900) was born in Ireland and spent most of his life in England, he visited America in 1882. He was very well-educated, having graduated from Trinity College, Dublin and then obtaining the equivalent of honors at Oxford's Magdalen College.

He was rather impecunious, however, after being educated and starting to make a name as a poet.  He has a very great desire to be famous; for what, he didn't care. Lured by the possibility of both fame and fortune, Wilde embarked on a speaking tour of the United States in December, 1881. On arriving in the port of NY, he said, "I have nothing to declare but my genius." He lectured about the aesthetic movement, which was popular at that time. The aesthetics believed that the function of art was to be lovely and appeal to the senses, not to have any moral lessons. Wilde's speaking ability was such that he left audiences spellbound. 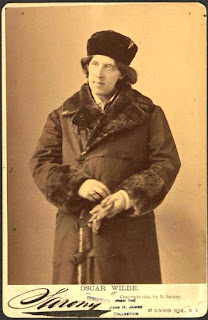 While in America, Wilde worked on his ambition of becoming a playwright. He was not able to achieve this goal until years later in London, when his plays "The Importance of Being Ernest," and "An Ideal Husband," among his most well-known, were produced and were very popular.

He became known as a ladies' man here in the US, and was thought to intend to marry Newport belle Maud Howe. Certainly, Oscar's mother, a writer herself, goaded the poet to marry a well-off women to replenish the family's waning coffers. Oscar's elder brother Willie was running up debts and Oscar liked to live lavishly.

A year after arriving back in London in January 1883, he married Constance Lloyd, who had considerable money although she was not overly wealthy. She was a fellow leader of the aesthetic movement. They went on to have two sons together.

Oscar, however, preferred the company of handsome young men. In 1891, Wilde met the man who was to become the love of his life, Lord Alfred 'Bosie" Douglas, who was 16 years younger than the poet. Unfortunately, Bosie's father, the Marquess of Queensberry, known himself to be eccentric, accused Wilde of the crime of homosexuality. Wilde took him to court for libel, but unfortunately, the case backfired and Wilde himself was sentenced to two years of hard labor in Reading Gaol (jail). Afterwards, Wilde left the country to live on the continent under an assumed name. He was joined by Bosie.

You can now visit Oscar's "place" in New York City, Oscar Wilde NYC, at 45 West 27th Street, which has décor celebrating Wilde's life and genius. You will not be disappointed!

Photo: Oscar in 1882, photographed by Sarony in Union Square.
Posted by Dr. Linda Shookster at 3:34 PM No comments: